“No day will ever erase you from the memory of time”

A special day without you there 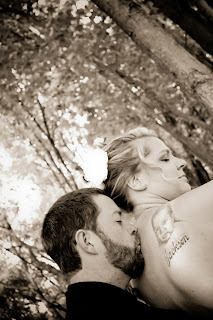 After 6 months of planning, lots of tears, a few conflicts and me trying not to spin around in circles, Tim and I are finally married. We beat the odds and are still together after losing the most important person in our world. We decided from the get go that we would not have children in our wedding party, for one reason there are way to many nieces and nephews to co-operate but also because the only ring bearer I wanted was Jackson. I tried to imagine the day if he was there, in his suit matching his dad's. Him sitting at the head table in between us, getting food all over his nice suit and probably Tim's and my dress. Dancing with his cousins and then attacking the cupcakes and candy buffet, then eventually crashing around 9. Even though that is not how the day went I still felt his presence every step of the way. We paid tribute to our son on our special day through a prayer and lit a candle. We made sure that our wedding pictures had a piece of him present. The day was "perfect" and went fairly smoothly. I have a feeling our little man had something do with.
Posted by Lindsay at 8:57 AM 3 comments:

Lindsay
My name is Lindsay. November 2nd, 2009 I became a mother to a beautiful baby boy that we named Jackson. He was perfect and wonderful, he even came out with a full head of red hair. On February 28th, 2010 I went the through the worst tragedy any mother could go through. My Jackson died. I took him the the hospital because his cold wasn't getting any better and within 24 hours my son died. I miss him every minute of everyday. He was the best part of our life and always will be.